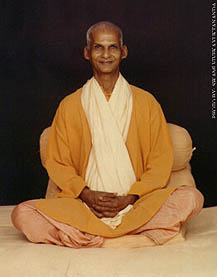 Born in Bhimavaram, Andhra Pradesh, in the year 1923 to prosperous parents, he was known as Ramalinga Raju. Even when he was studying in college, he was interested in the literary side, particularly philosophy and religion, and he was an admirer of Dr. Radhakrishnan, especially. Suddenly he felt an urge to renounce the world and found himself at the feet of Swami Sivananda, in the year 1946. Reading, doing Japa and meditation were his specialities. Swami Sivananda recognised the great spirit of renunciation in the young man and initiated him into the holy order of Sannyasa within two years of his joining the Ashram, on 14th January, 1948 and gave him the monastic name of Swami Dayananda. He accompanied Sri Gurudev during the All-India tour in 1950 and did untiring service to him, day and night, with great love and care.

Swami Dayananda is known as the active participant in the work of The Divine Life Society from the time Sri Gurudev felt it necessary to have a wing of the Ashram helping in printing work. The very seed of the Printing Press, it may be said, was sown by Swami Dayananda. Over night he worked a miracle, as it were, and brought a printing machine (a tradle machine) from Rishikesh town and saw to it that the very next day (20th September, 1951) the inauguration of the Printing Press so dear to Sri Gurudev was performed. He also worked and struggled tooth and nail to bring electricity to the Ashram, which he succeeded in bringing, a few years after the founding of the Printing Press. Actually the manner in which he brought electricity to the Ashram is an epic, a saga by itself. No person would have succeeded easily in doing that work, since it required permission from the Government which was not eager to spend money, for the sake of bringing connection to the Ashram. Anyhow by moving the District Magistrate of Dehra Dun, Swami Dayananda succeeded in doing this work. Thereafter he concentrated himself entirely on the Printing Department, even till today. Due to his persistent and tenacious concentration on this work the Press has increased its dimension. It has become one of the top-most Printing plants in the Garhwal region, which is all due to his indefatigable work and totally unselfish labour. Sri Gurudev loved him so much that once he said, "Ah! I am proud of you, Swami Dayananda," and added, "You are an embodiment of Nishkama Seva." Today, he is the main-spring behind the management of the Printing Press. Swami Chidananda paid his tribute thus: "Swami Dayanandaji Maharaj has been a pillar of this Institution over these decades. Today he is a ‘Veetaragi’, a ‘Nirlipta’, ‘Tyagi’ Saint. He is a rare Sadhu who in the midst of intense Guruseva is yet ever engaged in trying to abide constantly in the state of ‘Atma-samsthiti’. He is also ‘Iccha Rahita’ Yogi in the sense that he has no personal self-desire of any sort in his life. He has one overwhelming desire and that is Sri Gurudev’s Jnana Yajna. Other than his desire to meditate, meditate, meditate, his only second ambition in life is to see each and everyone of Holy Master Sivananda’s books in print and to make them available to thirsting spiritual aspirants all over the world."