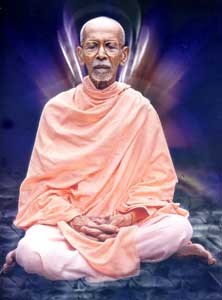 The great Shining Star who was worshipped and adored by millions all over the world is no more with us physically, but has enshrined himself in their hearts for all time to come.

We announce with a heavy heart the sad news of the Mahasamadhi of our beloved President, Most Worshipful H.H. Sri Swami Chidanandaji Maharaj, at 20.11 hours on Thursday, the 28th August. We humbly and most respectfully offer our homage and obeisance to him, whom our Pujya Gurudev Sri Swami Sivanandaji Maharaj had held in high esteem.

Pujya Sri Swami Chidanandaji Maharaj has been ailing for the last 3 or 4 years but has surprised everyone by meticulously conducting the affairs of the Ashram as the Spiritual Head of the Institution—The Divine Life Society—almost till the end of his life. Swamiji Maharaj was about to complete his 92 years of age on the 24th September. Unexpectedly, on the morning of Tuesday, the 26th of August, his condition took a serious turn and he slid into coma. Doctors were at hand to monitor his condition. Since there was no palpable improvement, the next day they created all the facilities of the Intensive Care Unit where he has been staying itself. The inevitable end came the next day. Thereupon, in strict compliance of his ardent wish that his mortal remains should be consigned to Holy Ganga Mata before sunrise, preparations were afoot forthwith for that great ceremony starting at 3.30 in the early hours of the 29th August. Swamiji’s body was placed on a chair bedecked with flowers and carried from Gurudev’s Samadhi Shrine to the Ashram’s Ghat on Ganga via Ashram’s Bhajan Hall and Gurudev’s Kutir with chanting of Om Namah Sivaya, Om Namo Narayanaya, Om Namo Bhagavate Sivanandaya and Maha Mantra Kirtan. There, after the ceremonial Abhisheka with milk and Ganga Jala to the chanting of Purusha Sukta and Narayana Sukta, they dressed up the body with new clothes, garlands and Chandan and Kumkum, to fulfil another wish of Pujya Swamiji which stipulated chanting of Om Namo Bhagavate Sivanandaya 7 times, Maha Mantra 5 times, Maha Mrityunjaya Mantra 5 times and the Pranava Mantra OM 16 times before placing the body in a sac as per the norm. Then the senior Swamis and the officials of the Ashram, seated in 2 boats, took the body and consigned it to Holy Mother Ganga.

Revered Sri Swami Chidanandaji Maharaj was born on the 24th September, 1916 as the second of the five children and was given the name Sridhar Rao. His father, Srinivasa Rao, was a prosperous landlord owning several villages and farmlands and his mother, Sarojini Devi, was a very religious and saintly person. In an atmosphere of wealth, discipline and spiritual inspiration, young Sridhar Rao had naturally and effortlessly imbibed all the great qualities of head and heart. As a brilliant student, Sridhar had graduated in 1938 with distinction from the prestigious and predominantly Christian Loyola College in Madras, and easily gained the knowledge of Christian ideals and saints on account of which he could easily find the similarities in Christian and Hindu faiths.

Fired with zeal to find the Truth, he disappeared from home and joined an Ashram near Tirupathi in southern India, but the family brought him back home. But the young Sridhar continued his spiritual practices without losing sight of the Goal even while living at home.

Coming from a noble and aristocratic family of the upper strata of society in Mangalore City in the southern State of Karnataka, he unmistakably displayed from early in life the sterling qualities of nobility, magnanimity, generosity, compassion and a host of other traits that go to make one a man of great stature. So, it is simply superfluous to say that he was a stalwart!

Most Worshipful Sri Swami Chidanandaji Maharaj joined the Sivananda Ashram in 1943 as Sridhar Rao and, by dint of his amiable nature and his love and dedication to the Institution, he soon endeared himself to one and all at the Ashram. Soon, Pujya Gurudev recognised in him potential saintliness. In 1949, fittingly, Gurudev bestowed Sannyasa Diksha on him and made him the General Secretary of the Institution, which duty he fulfilled creditably throughout his tenure as such.

Pujya Swamiji was noted for his tender care of the sick, and for his exceptional attention to lepers and sick animals. He delivered brilliant lectures, wrote soul-stirring articles and founded the most instructive Yoga Museum all which naturally elicited the admiration of Gurudev who subsequently sent him as His spiritual Emissary all over the world.

Swamiji Maharaj accompanied Gurudev and His other disciples on the epoch-making tour of India and Ceylon in 1950 lasting for 2 months. He had been a most favoured and chosen disciple of Gurudev almost from the beginning of his entry into the Ashram. On the visit of any important dignitary, or a high ranking official of the Government, or a saint to the Ashram, Swamiji Maharaj was there, readily to talk to them and acquaint them with the activities of the Ashram besides impressing them with the aims and objects of the Institution under the spiritual banner of Gurudev. He used every available opportunity to glorify Gurudev and earned His coveted blessings in abundance.

A crucial moment came in his life in 1956 when Gurudev called him and opened His heart to tell him that He wanted to nominate Swamiji as His successor. In all humility, Swamiji Maharaj played down the offer, citing his preference to pursuing his spiritual practices exclusively, which he could not hitherto attend to due to the heavy responsibilities as the General Secretary of the Institution. But Gurudev knew in His heart of hearts that Revered Sri Swami Chidanandaji Maharaj was the rightful, deserving successor. There was another occasion in 1962 when Gurudev mooted the same idea which also somehow didn’t fructify for similar reasons. It became quite evident by that time that he was the unmistakable choice for succession. So, Sri Gurudev’s ardent wish, call it a prophecy or Satsankalpa, took precedence over everything else and Revered Swamiji Maharaj was installed as the President of the world-wide Divine Life Society after the Maha Samadhi of Pujya Gurudev in the month of August 1963.

Revered Swamiji Maharaj extensively travelled to every nook and corner of the globe times without number, again and again. He spared no pains to propagate Gurudev’s life-transforming teachings effectively whenever opportunity offered itself. Rather, he created opportunities galore to vigorously fulfil that duty of his to his Master and His Mission in carrying Gurudev’s torch of Jnana-Yajna.

Thousands had been closer to Revered Swamiji Maharaj in his life rendering service to him personally, doing correspondence for him, assisting him in the Ashram’s administrative work or chores of any other nature which all cannot be mentioned here for want of space. But one thing cannot slip from anybody’s memory, i.e., the outstanding, untiring and unreserved services of our honourable General Secretary, Revered Sri Swami Vimalanandaji Maharaj, to Pujya Chidanandaji Maharaj for 55 years since he came to the Ashram in 1953.

Many glowing tributes are coming from devotees, spiritual personalities, Heads of Ashrams and men of letters from different parts of the world, and many leading newspapers and TV Channels of English as well as other vernacular languages have widely splashed the write-ups about Pujya Swamiji Maharaj.

As per the custom in Sannyasa tradition, the 16th day of his Samadhi (Shodashi) will be observed on 12th September as a solemn occasion. Hari Om Tat Sat.